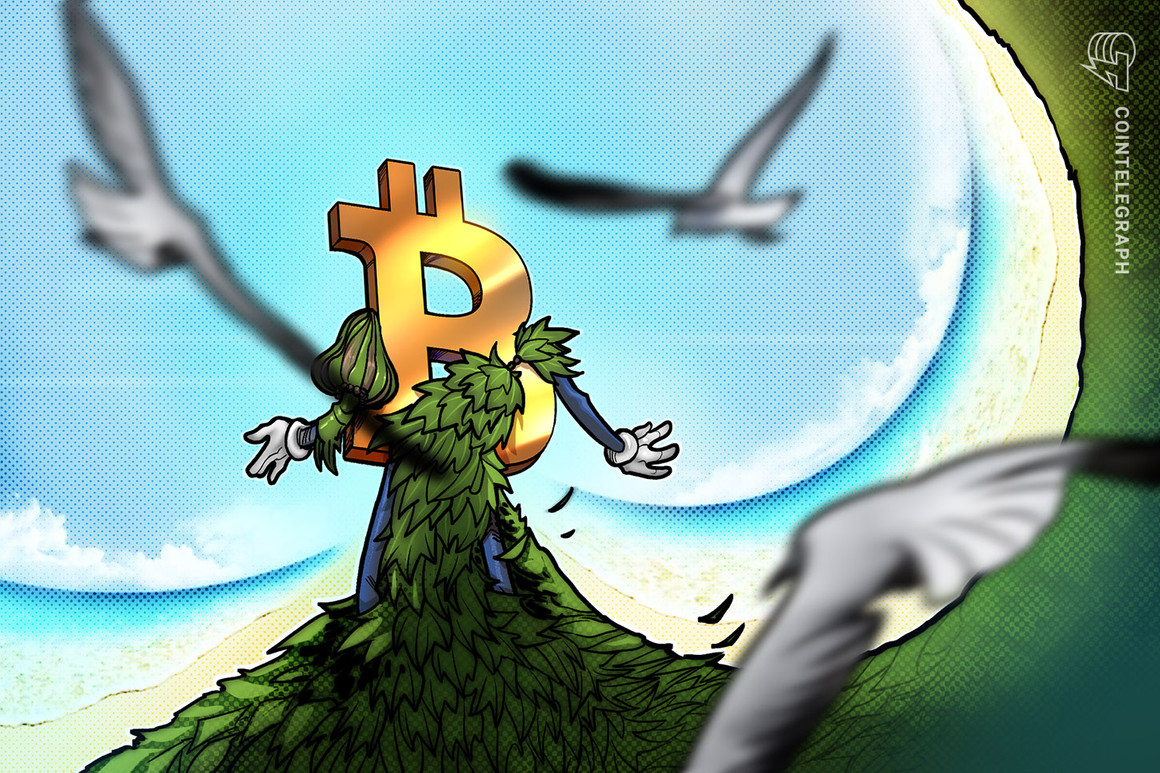 Bitcoin (BTC) may be the last thing one might consider when thinking about ways to ensure a clean-energy future. This has especially become the case following a tweet sent by tech entrepreneur Elon Musk back in May, in which he stated that Tesla would stop accepting BTC payments due to the increasing usage of fossil fuels for mining.

Yet raising awareness around the high energy costs typically associated with Bitcoin mining didn’t negatively impact the crypto ecosystem — in fact, it did just the opposite. Following Musk’s tweet, a number of cryptocurrency mining companies came out of the woodwork to explain how Bitcoin can be mined using renewable energy sources, such as wind, solar and geothermal energy.

It’s also important to point out that leveraging renewable energy to mine Bitcoin had been the case for some companies long before Musk raised concerns on Twitter. For example, Peter Wall, CEO of Argo Blockchain — a company focused on large-scale crypto mining — told Cointelegraph that to him, clean crypto mining was necessary from the start: “Back in 2018, Argo was considering mining using natural gas in Alberta, and I felt uneasy about this. I said, ‘This wasn’t right.’”

Since then, Wall noted that Argo has pledged to become “climate positive,” meaning that Argo’s operations will become carbon negative, rather than neutral. While this may seem like a difficult task, Wall explained that Argo uses hydropower to mine Bitcoin at its mining operation in Quebec, Canada. In addition, Wall shared that Argo is currently building a 200-megawatt crypto mining facility in Texas that uses wind power coming from the Lone Star State’s power grid.

Wall believes that renewables and Bitcoin mining go hand in hand, noting that the excess power generated by renewable sources would otherwise go to waste if not harnessed:

“Crypto mining takes power usage away from long transmission lines and uses it right at its source. It acts as this extra load that can be on for the majority of the time, and when there needs to be other peak loads going into cities, we can shut down.”

While this demonstrates that clean energy sources can be used to mine crypto, Wall makes an even more important point regarding renewables and storage. According to Square’s report entitled “Bitcoin is Key to an Abundant, Clean Energy Future,” solar and wind power have become the lowest and most scalable renewable energy sources to date. It’s further noted that these sources will continue to become more affordable over time. However, the report states that solar and wind projects are often built in rural areas that are filled with sunlight and wind but lack end-power uses (nearby loads). In turn, increased transmission capacity and energy storage will be critical for solving such problems.

Not only can crypto mining act as a much-needed load balancer for renewables, but the process can also ensure profitability for clean energy providers. John Kotek, senior vice president of policy development and public affairs at the Nuclear Energy Institute, told Cointelegraph that nuclear energy, for example, is the optimal electricity supplier for cryptocurrency:

Specifically speaking, Kotek mentioned that a key benefit achieved by nuclear operators, in this case, is the ability to leverage mining operations as a reliable customer that provides stable revenue for long-term investments in the ongoing operation of the plant. “It’s a win-win for both sides,” said Kotek.

This has certainly become evident, as the concept of using nuclear power to mine cryptocurrency is quickly catching on. For example, North American mining firm Compass Mining announced in July that it had signed a 20-year deal with nuclear fission startup Oklo. This partnership will provide Compass with 150 megawatts (MW) of energy after its mini-reactors are deployed within the coming years.

More recently, Talen Energy Corporation — one of the largest competitive power generation and infrastructure companies in North America — announced a joint venture with United States-based Bitcoin mining company TeraWulf to develop up to 300 MW of zero-carbon Bitcoin mining capacity. Phase 1 of the joint venture — dubbed “Nautilus Cryptomine” — will include a 180-MW Bitcoin mining facility built on Talen’s digital infrastructure campus adjacent to its nuclear power generation station. This means that the Nautilus Cryptomine facility will be located “behind the meter” to provide the miner with very low electricity costs.

As the concept of clean crypto mining catches on, it’s also interesting to point out that new developments are being implemented to ensure that this process becomes more accessible.

For example, Blockstream, a blockchain infrastructure company, recently launched a new service called “Blockstream Energy” that allows power producers in even the most remote locations to sell excess electricity to proof-of-work miners.

Adam Back, CEO of Blockstream, told Cointelegraph that Blockstream leases modular mining units, or MMUs, to power producers, along with an energy-purchase contract that entails Blockstream buy power on demand. Back explained that MMUs are “self-contained data centers with integrated ASICs, power distribution, network, cooling, monitoring and management.” According to Back, MMUs are designed for rapid deployment and are scalable in 1-MW modules:

“The goal of Blockstream Energy is to better match available energy production with energy demand. Energy producers can have control not only over the energy supply they produce but can control the demand side as well. This enables energy producers to operate far more efficiently and accelerate renewable energy projects.”

A work in progress

While clean crypto mining appears to be an ongoing trend, the industry still has a ways to go before making a real impact on the environment. According to the University of Cambridge’s “3rd Global Cryptoasset Benchmarking Study,” 62% of global crypto miners rely on hydropower, while 38% use coal, and 39% use a combination of wind, solar or geothermal energy. As of September of last year, the report estimated that only 39% of Bitcoin’s energy consumption is carbon neutral.

And even though progress toward carbon-neutral crypto mining is being made, a number of challenges remain. For instance, Yaron Ben Nun, founder and chief technology officer of Nostromo Energy — a company focused on cold energy storage systems — told Cointelegraph that while clean mining can certainly work alongside renewables, it most likely will not be a simple undertaking.

For example, Ben Nun mentioned that mining Bitcoin via solar electricity will likely require batteries to stabilize the electricity generated from the sun to store any surplus energy to be used overnight. In turn, Ben Nun mentioned that a numerous amount of batteries will be needed. Secondly, he pointed out that these mining facilities will need to be isolated from the grid, or installed directly on a grid that supports remote solar plants, which is rare in regions that have low-cost electricity infrastructures.

In addition to these issues, Wall pointed out that MMUs being leveraged by Blockstream Energy will require a strong internet connection, which could be challenging in remote areas.

Despite hardships, Wall remains optimistic about eliminating carbon emissions entirely. Back further shared that Blockstream is already seeing strong demand for its MMU product, adding, “This allows power producers to focus on what they do best — generating power.”