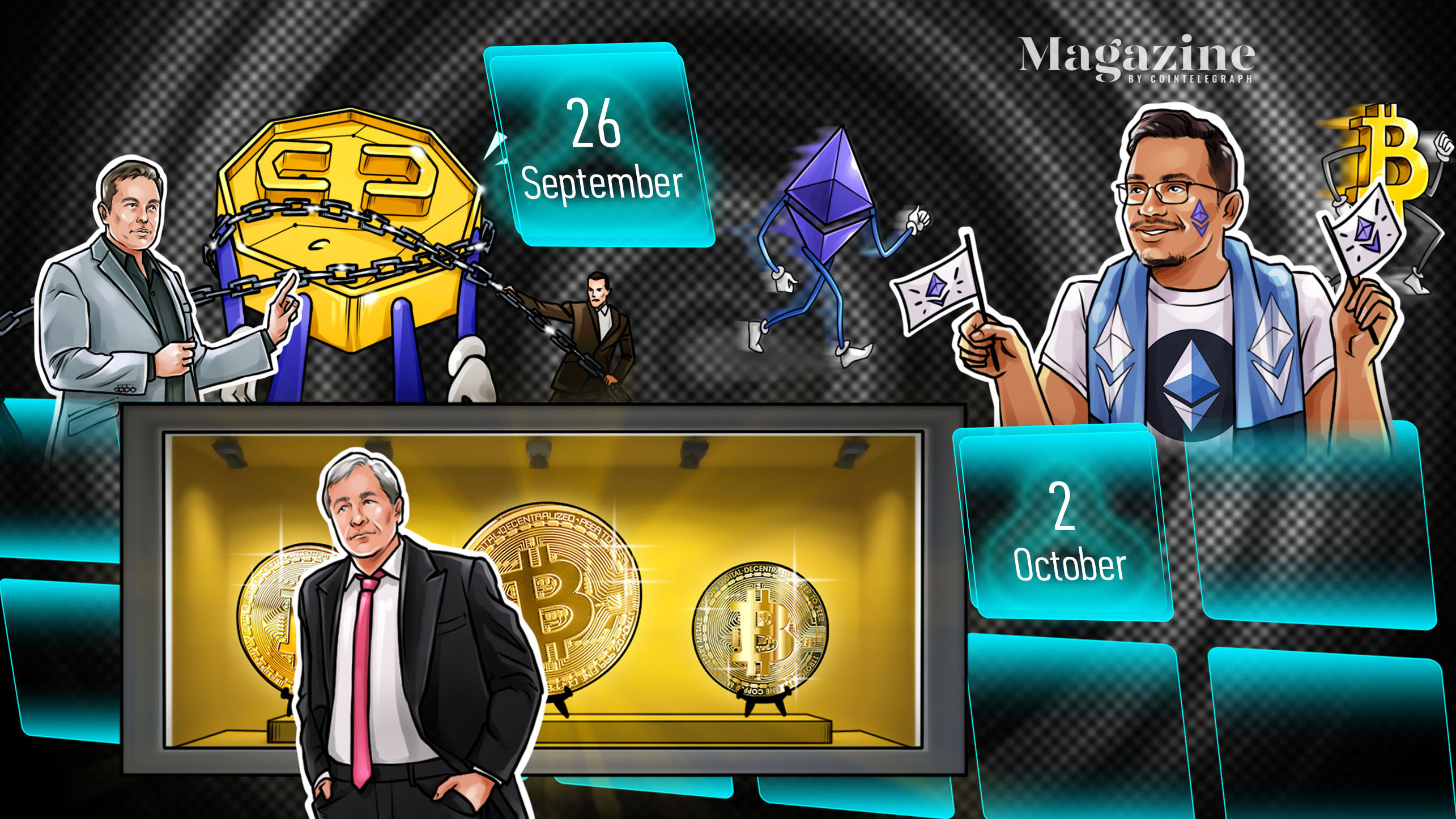 Coming every Saturday, Hodler’s Digest will help you track every single important news story that happened this week. The best (and worst) quotes, adoption and regulation highlights, leading coins, predictions and much more — a week on Cointelegraph in one link.

Billy Markus, the co-founder of the beloved Dogecoin (DOGE), emphasized the importance of completing an Ethereum-to-Dogecoin bridge on Thursday, citing that the asset could be integrated for payments on Ethereum-based NFT marketplaces.

Markus stated that there is “high demand” to purchase NFTs within the crypto community and that enabling NFT purchases with DOGE “greatly increases its utility.”

The development of a Dogecoin–Ethereum bridge would mark a significant milestone for the meme coin, as it would enable users to send DOGE from the Dogecoin blockchain to the Ethereum blockchain, and utilize the asset in the DeFi and NFT sectors via ERC-20 DOGE token contracts.

Jamie Dimon, the CEO of JPMorgan Chase and staunch crypto critic, has slammed Bitcoin’s appeal despite admitting that its price could multiply by 10 within five years, presumably because he doesn’t like making good returns on his investments.

During an interview with The Times of India, the CEO was asked whether Bitcoin (BTC) or other crypto assets should be banned or regulated. Dimon answered by taking a swing at the hype surrounding the asset, stating:

“I don’t really care about Bitcoin. I think people waste too much time and breath on it. But it is going to be regulated. […] And that will constrain it to some extent. But whether it eliminates it, I have no idea and I don’t personally care. I am not a buyer of Bitcoin. […] That does not mean it can’t go 10 times in price in the next five years.”

Speaking of large investment banks, it was reported on Monday that Morgan Stanley has more than doubled its exposure to the Grayscale Bitcoin Trust (GBTC) since April.

According to a recent SEC filing, the Morgan Stanley Europe Opportunity Fund owned a total of 58,116 GBTC shares as of July 31. The holdings are worth around $1.96 million at the time of writing, representing an 18.3% decrease on the $2.4 million Morgan Stanley said it has splurged on GBTC.

Previous filings show that Morgan Stanley has increased its shares of GBTC by more than 105% since April, suggesting that market volatility over recent months affected its appetite for Bitcoin via Grayscale.

On Thursday, payments giant Visa announced an ambitious project that aims to be a “universal adapter” of blockchains that can connect multiple crypto assets, stablecoins and “spawn of satan” central bank digital currencies (CBDCs).

The project, dubbed the “Universal Payment Channel,” is hoping to serve as an interoperable blockchain hub that can connect to multiple blockchain networks and enable transfers of different crypto from various protocols and wallets.

“Imagine splitting the check with your friends, when everyone at the table is using a different type of money — some using a central bank digital currency […] like Sweden’s eKrona, and others preferring a private stablecoin like USDC,” Visa wrote, as it emphasized the benefits to users without revealing how centralized the hub may be.

Schlindwein, who appears to have no intent on swindling, was paid $1.05 million for his work, which consisted of $1 million from Immunefi and $50,000 from BSC’s Priority ONE program.

“I went through the list of bug bounties on Immunefi and picked Belt Finance as the next one to work on,” Schlindwein told Cointelegraph, adding:

“While I was studying their smart contracts, I noticed a potential bug in the internal bookkeeping, which keeps track of each user’s deposited funds. Playing the attack through with pen and paper gave me more confidence in the existence of the bug. I continued by producing a proper proof-of-concept (PoC) which undoubtedly confirmed its validity and economic damage.”

For more info on crypto prices, make sure to read Cointelegraph’s market analysis.

“I don’t really care about Bitcoin. I think people waste too much time and breath on it. But it is going to be regulated. […] And that will constrain it to some extent. But whether it eliminates it, I have no idea and I don’t personally care. I am not a buyer of Bitcoin. […] That does not mean it can’t go 10 times in price in the next five years.”

“The most difficult aspect of Bitcoin to grasp is that it’s completely unique — nothing like it has ever existed. There’s nothing for the media to compare it to, and they’re unable to fully understand the magnitude of the coming paradigm shift that Bitcoin will bring.”

“There is no doubt that the crypto assets market is becoming more mainstream in the institutional and wealth management sectors.”

“Millennial gamers hold 55% of all crypto assets, compared to just 5% of all millenials, showing that gamers are far more likely to hold crypto than the average person. Eighty percent of gamers who own crypto are also interested in using cryptocurrency to purchase games and in-game items.”

“Not only is Saule Omarova, Biden’s pick to lead the OCC, a threat to our traditional economy, she also wants to regulate crypto into oblivion. Crypto faces future-defining government regulations. This nomination needs to be stopped.”

“It is not possible to, I think, destroy crypto, but it is possible for governments to slow down its advancement.”

“Sooner or later, ETH will outpace Bitcoin and become the global standard.”

Prediction of the Week

Gavin Andresen, one of the earliest developers of the Bitcoin network, published a blog post recently about one of the potential outcomes for Bitcoin many years down the road. Andresen, however, included the caveat that the future he described is possible, yet unlikely.

Andresen’s forecast saw BTC in 2061 having a hefty price tag of $6 million per coin, complete with $7,500 transaction fees. Bitcoin’s price will not have risen to that valuation solely of its own accord, however, but largely as a result of inflation by a factor of six. He predicted that, by 2061, $6 million will have the purchasing power of $1 million at today’s dollar value. Large holders of BTC will run the coin’s blockchain by then, with most transactions taking place on other blockchains via wrapped versions of BTC.

Fast-forward another 39 years to 2100, and Bitcoin will see very little activity on its main blockchain since, by that time, the mining reward will have been cut in half so many times that mining and maintaining the network are not worth the effort. At that point, the whales ruling Bitcoin would halt the network, and BTC would then simply live on other blockchains in wrapped form.

FUD of the Week

Following the latest crackdown from the Chinese government, Ethereum mining pool Sparkpool suspended access to new users in China and abroad on Thursday.

According to an announcement on Monday, the measures are being put in place to ensure the safety of users’ assets in response to China banning crypto yet again. “Further details about the shutdown will be sent out through announcements, emails, and in-site messages,” Sparkpool said.

Alibaba also faced some crypto mining-related issues this week amid the crackdown in China, announcing on Monday that its platform will prohibit sales of cryptocurrency miners and suspend categories for blockchain miners and accessories from its website on Oct. 8.

The company’s decision was tied to regulatory compliance issues with crypto. The e-commerce giant is also halting sales of crypto mining devices and imposing a ban on using its platforms to sell major cryptocurrencies, such as Bitcoin, Ether (ETH) and Litecoin (LTC).

Alibaba stated that any sellers who continue to list banned crypto-related products and services after Oct. 15 will face a range of penalties including blocking stores, and freezing and closing merchant accounts.

The United States Commodity Futures Trading Commission (CFTC) announced Tuesday that it is ordering top crypto exchange Kraken to pay $1.25 million in civil penalties over allegations that the firm exchange is violating the Commodity Exchange Act.

The CFTC attests that Kraken has failed to register with the regulatory body as a futures commission merchant (FCM), and is therefore offering illegal margined retail commodity trading via crypto assets.

The CFTC said the action was a “part of broader effort to protect U.S. customers” and emphasized that exchanges that offer “margined, leveraged or financed digital asset trading” must register as an FCM or face the regulatory hammer.

The next generation of data-driven healthcare is here

Implementing artificial intelligence and blockchain technology into healthcare and medicine is key to unlocking human longevity.

“They’re looking for these antiquities but keep hitting a wall because they’re so used to using OpenSea.”

Cool green mayor giving a grand in Bitcoin to each resident

“I never thought so many people would care about this tiny little town in Missouri.”